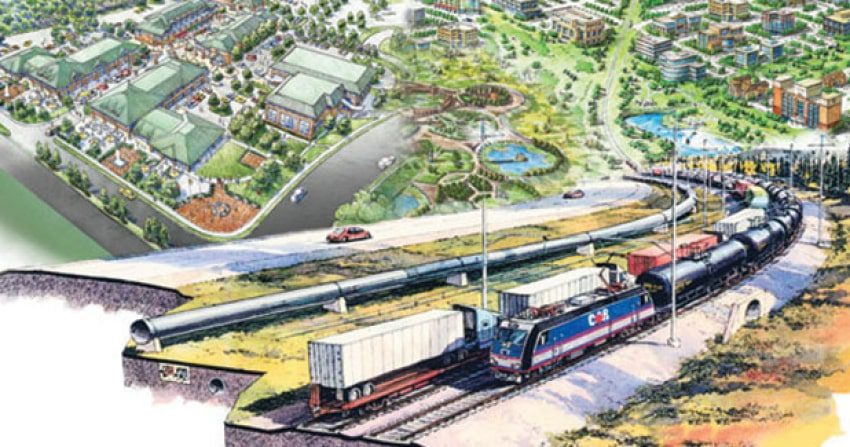 The Delhi Mumbai Industrial Corridor (DMIC) is a huge infrastructure project that will span over 2,700 kilometers and is expected to cost about $90 billion. The DMIC will be built through an industrial corridor that runs from the western edge of Delhi in India to the northern edge of Mumbai in India. It is being built by Reliance Power and includes Tata Group, Adani, GMR Group, and others. The DMIC has been given the status of a Public-Private Partnership Project between the Government and Private Sector to garner investments. This article will look at some of the key aspects related to the DMIC Project.

It will start from Dadri (UP) – Delhi – Haryana – Rajasthan – Gujarat – Madhya Pradesh and ending at Maharashtra (JNPT).

This massive infrastructure will have an impact on 17% of India’s overall land area.

The Goals of the DMIC Project

The goals of the DMIC project are to create an economic backbone for India, improve productivity, create employment opportunities, and establish regional development.

The DMIC project is focused on creating a significant industrial corridor that will spur economic growth in the region and give it a global competitive edge.

It is important to note that this project has been given the status of a Public-Private Partnership Project between the Government and Private Sector to garner investments.

The Benefits of the DMIC Project

The DMIC project is expected to bring about profound economic and social changes for India and the world.

The project is anticipated to generate more than 400,000 jobs during its construction phase and provide an employment opportunity for 2 million people.

It’s also expected to help boost industrial growth in the region by up to 10 percent.

The DMIC project will have a significant positive impact on the Indian economy and the global economy.

The project is also likely going to have a significant effect on improving infrastructure in India, leading to improved transport and logistics efficiency, all of which are key factors in boosting economic growth.

This project is set to catalyze the advancement of India’s gross domestic product (GDP) rate.

That number may rise if it becomes a success because it has been targeted as an area with large potential for industrial development.

Many countries are looking towards India for this industry-driven economic growth model.

The Challenges of the DMIC Project

The DMIC project is a massive undertaking, and the challenges that lie ahead are many. For starters, the project will require a lot of land acquisition, resulting in displacing thousands of people. The DMIC project also has several issues to contend with, such as pollution.

The biggest challenge will be how the government manages this huge project effectively. With so many moving parts and several private sector companies involved, there will be a lot of coordination required between them to make sure the DMIC project runs smoothly.

The corridor will accelerate India’s industrial development by improving trade and manufacturing operations within the country.

It will act as a catalyst for regional development and the DFC aims to bring down the manufacturing cost along the DMIC to lowest in the world.

The DMIC project is expected to be completed by 2024.

The Delhi Mumbai Industrial Corridor project has been the focus of many people’s attention since it was announced in 2006. It’s a vast project that spans from Delhi to Mumbai and from Gujarat to Rajasthan. It will create a total of 1.2 million jobs and bring in 10,000 crore rupees into the economy of India.

While this project is a great opportunity for India, many challenges must be overcome. The DMIC project is estimated to cost $90 billion and is expected to be completed in 2024. So what are the plans for providing this massive project with the money necessary for it?

DHOLERA IS A PART OF CENTRAL GOVERNMENT’S DMIC PROJECT. DHOLERA SIR IS ONE OF THE 24 UNITS OF DMIC.